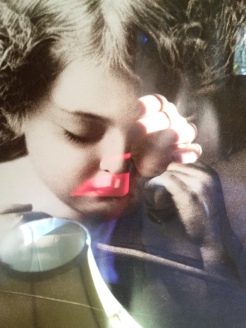 Reflections from a window provide a modern take on Morris Burke Parkinson’s late  Victorian photogravures of four-year-old Josephine Anderson, copyrighted by the photographer in 1897.

Parkinson’s work is highly stylized and dramatic with something of a staged effect, typical of Pictorialism, a  style of photography made popular by Henry Peach Robinson in the 1860’s.

The two images became widespread in American homes in the the early twentieth century when they were mass produced and marketed through Sears, Woolworths and other stores across the country.

I discovered these still popular collectors items at Maggies Cottage, a Bed and Breakfast just outside Castlemaine in Victoria. They graced the cosy upstairs bedroom in the romantic mudbrick cottage.

Castlemaine, is a great place to visit if you love twentieth century brick-a -brack. Visit the Bazaar at the old Woollen Mill. The Cupids would be absolutely at home there.