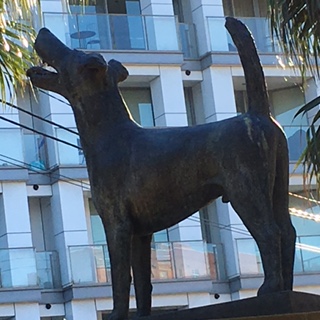 A favourite landmark with local residents and group walking tours is Clary Akon’s Foxie – a humble bronze statue that stands on top of Broomfield Memorial Drinking Fountain in the rockery garden at Bradfield Park North. The diminutive sculpture was installed in 2007 atop the original drinking fountain and was commissioned by North Sydney Council to commemorate the 75th Anniversary of the opening of the monumental Sydney Harbour Bridge, which towers above the life size terrier pup who welcomes community and canine friends alike.