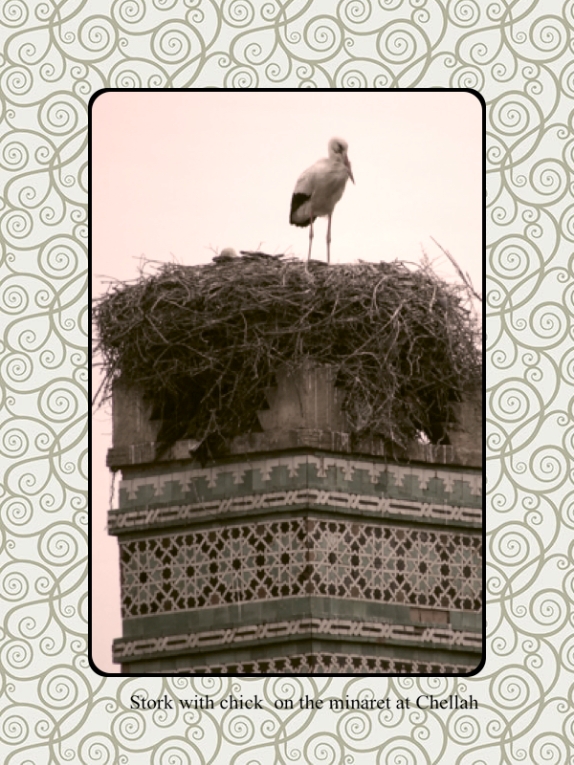 While Storks nest  on chimneys and roofs in Europe, they seem to favour Minarets and Roman ruins in Morocco.

The ancient Roman sight at Chellah, on the edge of the city Rabat was port and trading  town called Sala Colonia. The Romans established Sala Colonia in 40 AD.

In 250 AD the local Berber tribesmen gained control of the city. It  appears to have developed little  until the 12 the century AD Abdul-Mu’min built defensive walls around the entire complex. Some sources say it was used a fort, others that it was a burial ground by the Almohas dynasty.

What is certain is that became a holy necropolis (Chellah) under the Merinid Dynasty who constructed the mosque and the mineret pictured. The Merinad Sulton Abu Al-Hasan (c.1297-1351) ruled Morocco twenty years. Although he died in the high Atlas Mountains after being defeated by his son Abu Inan Faris, his resting place is Chellah

The archaeological site of Volubilis was an important outpost of the Roman Empire founded in the 3rd century BC. There are the remains of impressive civic structures and well preserved mosiac floors.

We arrived on a cold, windy day but the light made the site wonderfuly dramatic. Our diminutive elderly site guide did not share our wish to soak up the atmosphere. “Come on my family,” he kept saying, trying to gather the stragglers and keep his flock on the move.

Piling laughingly into the van, we recounted to Said how we’d been an unruly brood. That sealed it: from then on our little group became “La Famille”.